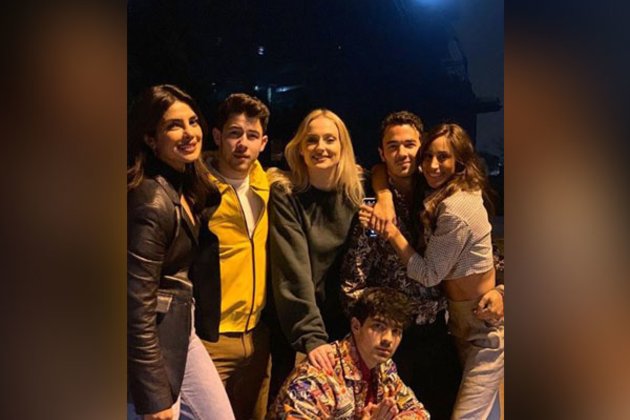 Washington D.C. [USA], Sept 11 (ANI): The Jonas Brothers--Nick, Kevin, and Joe, reunited this year and made an amazing comeback with their hit song 'Sucker' and the youngest bandmate has credited the trio's wives for the success.

Back in February the JoBros released their first single since reuniting as a band. The song, 'Sucker', rose to the top of the charts and earned the group accolades, including an MTV Video Music Award for Best Pop.

The trio also released a music video in which they starred alongside their wives -- Danielle Jonas, Sophie Turner and Priyanka Chopra in vibrant outfits.

The music video has racked up over 200 million views to date and earned four nominations at the MTV Video Music Awards. And the youngest band member Nick credits the video's success to the trio of wives, also known as the J Sisters, reported People.

"We knew that context needed to be given about where we are now. And I think the biggest piece of that puzzle is those three incredible women who stand by our side," Nick said in Cigar Aficionado's October cover story, as cited by People.

"And they stole the show in our video," he added.

'Sucker' picked up the VMA for best pop, and while it missed out on the video of the year, Nick joked that had they won the night's biggest honour, "The ladies have to go up and accept it on our behalf, because they absolutely stole the show."Jonas married Priyanka in December, and their union has since given him newfound perspective.

The 'Jealous' singer admitted to Cigar Aficionado that his oldest brother Kevin getting married in 2009 contributed to the band breaking up because Kevin started to prioritise his relationship with Danielle over that with his bandmates.

"We were all just in different places," Nick said.

"Joe and I were not emotionally mature enough to understand that when you find your person, and you begin your life with that person, that takes priority over everything. It has to. It should," he added.

However, they reunited thanks to a trip to Cuba that included jamming to some of the group's old songs, sipping rum and of course smoking cigars.

"Nothing beats smoking a Cuban cigar in Cuba. Everywhere we went, they would just bring out a tray of incredible cigars. It was special," Nick said. (ANI)

LINGAYEN, Pangasinan, Jan. 24 (PIA) - As China is grappling to contain an outbreak of coronavirus, in the Philippipines, the ...

SYDNEY, NSW, Australia - Flags will be flown at half mast throughout New South Wales in Australia on Friday, following ...

Heads of state and government from dozens of countries arrived in Jerusalem to mark the 75th anniversary of the liberation ...

GENEVA, Switzerland (ANI/Sputnik) - The WHO Emergency Committee held a discussion on Wednesday over concerns about the coronavirus outbreak in ...

DUBLIN, Ireland - The importance of the tourism industry to Ireland has been highlighted in a report which has examined ...

SYDNEY, Australia - Shares in China dropped sharply on Friday as two populous cities in the country went into lockdown ...

Huanggang locks down over coronovirus threat

BEIJING, China - The authorities in Huanggang city in China have imposed a quarantine lockdown in a bid to stop ...