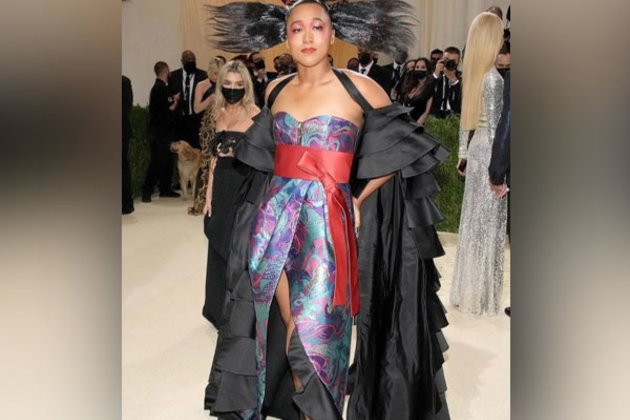 Washington [US], September 14 (ANI): Naomi Osaka isn't just a winner on the tennis court, but she also deserves a trophy for her stunning Met Gala fashion choice.

The 23-year-old tennis star graced the Met Gala 2021 in an outfit that grabbed many eyeballs and of course, it was in line with the evening's theme: In America: A Lexicon of Fashion.

Naomi arrived at the 2021 Met Gala in a custom Louis Vuitton outfit, featuring a purple and blue swirl-print gown with a sweetheart-style neckline and an elaborate black ruffled cape, reported People magazine.

She amped up the drama quotient by pairing it with black boots and an elaborate hairstyle, accented with red sparkles.

"We both really love fashion and we love designing," Naomi said, adding that they paid homage to the theme of the night (In America) by representing her heritage.

"For me Americana kinda means a mix of all cultures and this dress and this look kind of represents my two backgrounds, Haitian and Japanese, so I was really glad I was able to incorporate it," she added.

The tennis star is attending the big night with her boyfriend, rapper Cordae.

Due to the COVID-19 pandemic, this year's Met Gala event organisers have issued a vaccination mandate and mask requirement. All guests are expected to wear a mask indoors except when eating or drinking. (ANI)

WASHINGTON D.C.: The Biden administration is drafting a plan to protect workers and communities from extreme heat, after a dangerously ...

ASUNCION, Paraguay: The Paraguay River experienced the steepest decline in its water levels in more than 117 years on September ...

ROME, Italy: Hundreds of Alitalia workers stopped highway traffic as they blocked an airport exit on Friday to protest that ...

PRAGUE, Czech Republic: The right-of-center Czech party, the SPD, which could be part of a new Czech government next month, ...

Experts say, after hurricanes, flood insurance rates to rise in US

NEW YORK CITY, New York: According to a study released by financial services provider LendingTree on Tuesday, updates to the ...

United Airlines fined by U.S. for holding passengers on tarmacs

UK reports shortages nationwide due to lack of truck drivers

LONDON, England: With Britain remaining short of tens of thousands of truck drivers, shortages throughout the country range from gasoline, ...

GLASGOW, Scotland: Energy provider INEOS has announced that it will convert its large-scale petrochemicals plant and oil refinery in Grangemouth, ...

CHICAGO, Illinois: Housing sales in the United States fell in August amid sustained supply shortages, with indications that the housing ...

To Sleep With Anger