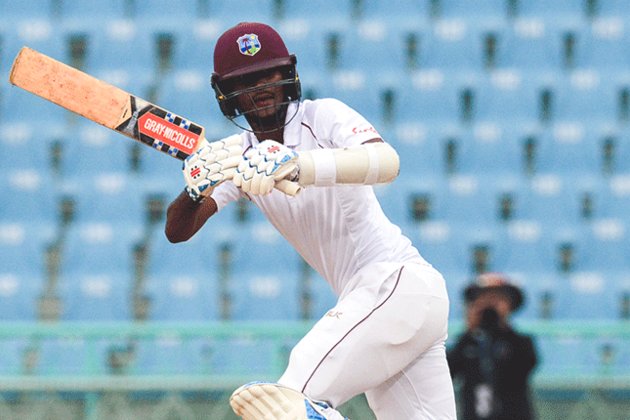 Kraigg Brathwaite and Shai Hope proved a thorn in England's side once again as the West Indies lost just one wicket on the fourth morning of the second Test at Old Trafford on Sunday.

West Indies were 118-2 at lunch, still needing a further 152 runs to avoid the follow-on as they look to win their first Test series in England for 32 years.

Brathwaite was 41 not out and Hope 25 not out, with the pair having scored three hundreds between them when the West Indies beat England by five wickets in the second Test at Headingley three years ago.

It was a frustrating morning for England, 1-0 down after a four-wicket loss in last week's first Test at Southampton in a series that marks international cricket's return from the coronavirus lockdown.

Enforcing the follow-on looks like England's best route to victory after the whole of Saturday's third day in Manchester was washed out.

By contrast, play resumed Sunday in bright sunshine with the West Indies 32-1.

Nightwatchman Alzarri Joseph, who might have been lbw to Sam Curran had England reviewed on Friday, should have been dismissed for 16 on Sunday when he edged Chris Woakes.

But third slip Ben Stokes dropped the catch after Zak Crawley, moving across from second slip, obscured his view.

Off-spinner Dom Bess, however, succeeded where England's quicks had failed when, with just his second ball of the day, he had Joseph caught by Ollie Pope at short leg for 32 with a sharply turning delivery.

The West Indies were now 70-2, with England looking to regain the Wisden Trophy after a 2-1 series loss in the Caribbean last year.

But Hope, whose lone two Test hundreds were at Headingley in 2017, cover-drove left-arm swing bowler Curran for two fours.

England wasted a review after Brathwaite, on 24, was rightly given not out following a caught-behind appeal off Woakes.

Dom Sibley then referred himself to the umpires after inadvertently applying saliva to the ball in breach of the bio-secure regulations governing this series.

But with players allowed some leeway, officials took no further action after cleaning the ball.

England came into this match with a revamped pace attack.

Having already decided to rest James Anderson and Mark Wood, in the midst of a schedule of six Tests in seven weeks, they have also been forced to do without Jofra Archer after the fast bowler was ruled out after admitting making an unauthorised trip outside of the teams' protective 'bubble' to his home after the first Test.

However, the England and Wales Cricket Board announced Saturday that, following a disciplinary hearing, Archer would be available for the third Test at Old Trafford starting on 24 July.

The U.S. space agency, NASA, reported Monday it has confirmed water can be found in sunlit areas of the moon, ...

America, damaged and divided, prepares to go to the polls

US President Donald Trump and his Democratic challenger Joe Biden are battling for the presidency of a deeply divided country, ...

RIVERSIDE, California - A U.S. man has been sentenced to twenty years in federal prison for conspiring to commit terrorist ...

UK needs to decide between bargaining power and negotiation strategy

LONDON, UK - Reaching an agreement in trade deals is, in the best of times, a long process. There are ...

SYDNEY, NSW, Australia - Stocks in Asia were limp on Monday, although the Hong Kong market showed some life.In Tokyo, ...

Foreign exchange reserves in Kenya tumbled $615 million in past month