No. 18 Tennessee hangs on vs. Mississippi State 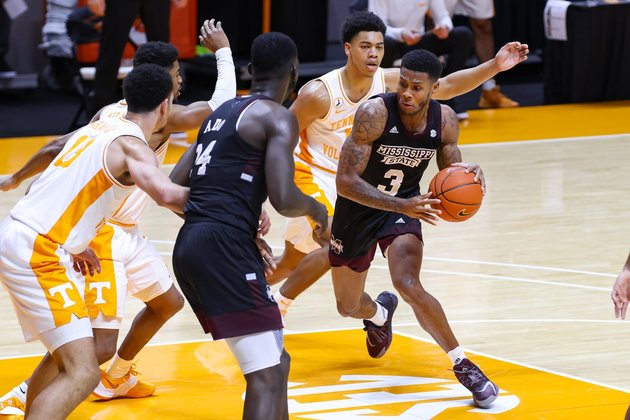 Jaden Springer, who sat out the last two games with an ankle injury, returned for Tennessee and responded with nine points, four rebounds and five assists.

John Fulkerson, who leads the Volunteers in scoring with 11.8 points per game, was held to four points and four rebounds.

All nine players who took the floor scored for Tennessee.

Mississippi State (9-8, 4-5) hung with the Vols the entire second half but missed a couple of baskets and free throws late.

The Bulldogs were playing their second straight game against a ranked opponent as they took on -- and lost -- to No. 9 Alabama on Saturday.

Neither team was especially careful with the ball, either. Mississippi State turned it over 18 times and the Vols 11 times.

Mississippi State held a 42-30 rebounding edge but was outscored in the paint 32-18.

The Vols came out hot on both defense and offense - Mississippi State didn't get its first points until the 16:40 mark in the first half while Tennessee was able to jump to a 15-4 lead at the 13:01 mark.

But then Tennessee got sloppy and went over five minutes without a basket and allowed the Bulldogs to pull back within three at 18-15 with just under eight minutes left. When Abdul Ado scored from the paint at the 5:19 mark, the score was tied at 20.

Both teams looked ragged from that point until the end of the half, but the Vols stumbled to a 26-23 halftime lead. The Bulldogs shot 33 percent from the floor (1 of 8 on 3-point attempts) while the Volunteers hit just over 30 percent on 1 of 11 from beyond the arc.

Stewart led all scorers with nine points in the half.

Both teams will step out of conference on Saturday. Mississippi State will play Iowa State while Tennessee will play 15th-ranked Kansas in the SEC/Big 12 Challenge.