Something that we feel strongly about: Windies skipper Pollard on taking knee 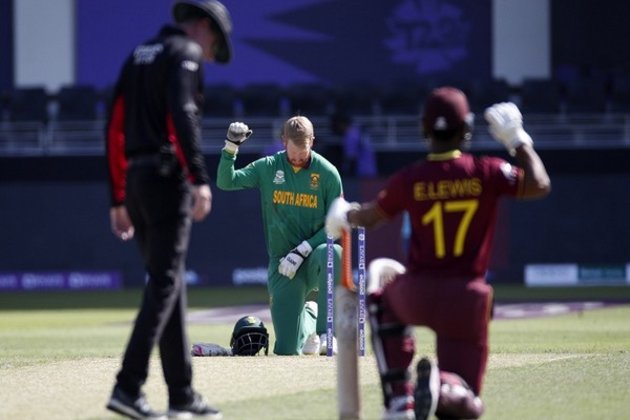 Dubai [UAE], October 26 (ANI): West Indies captain Kieron Pollard said that the Caribbean team feels very strongly about taking the knee and they will continue to do it in the ongoing ICC Men's ICC T20 World Cup.

Pollard added education is sort of key and every individual has their own opinions on taking the knee which is now widely considered as a stance against racism.

"It's something that we feel strongly about as a team and as a people, as well, and we will continue to do it," Pollard said in a post-match press conference on Tuesday. "Each and everyone has their own opinions on it, but as I've always said, once you're educated and you understand, we will understand you doing it, but I think education sort of is the key, and we don't want anyone doing it for us in solitude or to feel sorry for us."Before the clash against West Indies in the T20 World Cup, South Africa wicket-keeper Quinton de Kock made himself unavailable. The news came just hours after Cricket South Africa released a statement saying that all players should take the knee ahead of the game. De Kock was one of a number of South Africa players who had not been taking the knee ahead of recent internationals, including the team's tournament opener against Australia, with some players kneeling, some raising a fist and some standing.

West Indies captain Kieron Pollard refused to speculate on the issue. "I think it's something that I need to actually know about, hear about, understand what actually transpired, and then I might have a comment on it, but as of right now, yes, he has been my teammate in Mumbai Indians, we have played cricket together. That's where the buck stops in terms of everything else. Everything else is speculation. Let's see what happens after. Let me have an opportunity to digest; don't try to get anything out of me that I don't want to say," Pollard said when asked about De Kock's decision.

On-field, after their pace bowlers restricted the West Indies at the death, South Africa's top order were clinical in chasing down a target of 144 with eight wickets and 10 balls in hand. Rassie van der Dussen held firm while Reeza Hendricks and half-centurion Aiden Markram took the bowlers on, with the two fifty-plus stands steering the chase in Dubai.

South Africa will next play Sri Lanka on October 30 and West Indies will clash with Bangladesh on October 29. (ANI)