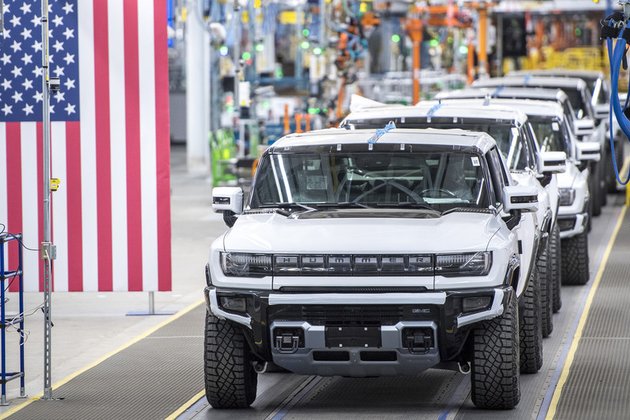 The carmaker wants to overtake Tesla as the world's biggest producer of electric vehicles.

"We will have the products, the battery cell capacity and the vehicle-assembly capacity to be the EV leader by mid-decade," GM CEO Mary Barra said in a statement, as cited by CNBC.

The investment will include $2.6 billion for the construction of a new battery plant in partnership with LG Energy Solution and $4 billion for converting GM's existing Orion Assembly plant in Detroit to produce electric trucks, like the recently announced and highly anticipated Chevrolet Silverado and GMC Sierra, scheduled for launch in 2024.

The announced funds also represent a part of GM's $35 billion agenda to increase its North American production capacity to 1 million electric vehicles by 2025. The carmaker forecasts it may beat rival EV producer Tesla as the top US-based seller of electric vehicles by that time.

The company also pledged to invest an additional $510 million to upgrade two of its non-electric vehicle assembly plants in Michigan.

"Michigan will be the recognized hub and leader of innovation in the US for EV R&D and manufacturing," the company's president, Mark Reuss, said during a media briefing.

GM is also converting its plants in Tennessee, Canada, and Mexico to assemble EVs, projecting that by 2030 half of its North American plants will be focused solely on EV production.

The car company has a long and bumpy road ahead, however, if it plans to topple Tesla as the top EV producer. Elon Musk's EV giant delivered 936,172 electric vehicles globally last year. According to some estimations, Tesla's 2021 US deliveries were well over 300,000 EVs, while GM sold less than 25,000 units, ranking third after Ford with 27,140 Mustang Mach-E EVs sold.