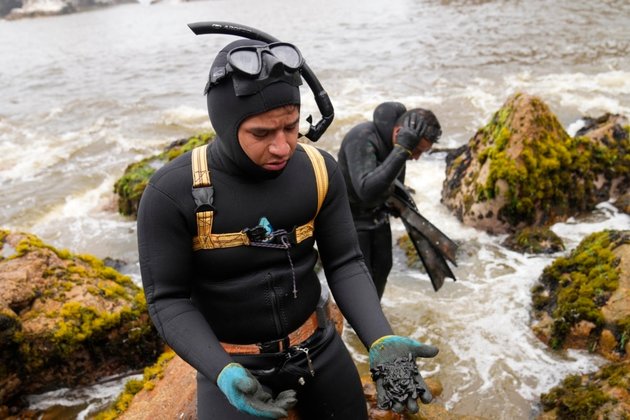 CIUDAD PACHACUTEC, Peru - Walter de la Cruz scrambled down a large sand dune in the fog to reach a rock overlooking the Pacific Ocean, where he has fished for three decades. He cast a hook into the waters off Peru's coast several times, with no luck. One attempt yielded a piece of plastic stained with oil.

De la Cruz, 60, is one of more than 2,500 fishermen whose livelihoods have been cast into doubt as a result of a large crude-oil spill at the Spanish-owned Repsol oil refinery on Jan. 15.

'We are desperate,' he said, counting on his fingers the debts that overwhelm him, including a bank loan, bills for water, electricity, gas, and school supplies for his two grandchildren.

Peru has characterized the spill of 11,900 barrels in front of a Repsol refinery as its 'worst ecological disaster.' A report by United Nations experts estimates it involved about 2,100 tons of crude, well above the 700 tons the International Tanker Owners Pollution Federation Limited considers the threshold for a large spill - and an unprecedented amount for the type of crude that leaked. The oil was extracted from Buzios, the world's largest deep water oil field and the most productive in Brazil.

The spill happened when the Mare Doricum, an Italian-flagged tanker, was unloading oil at La Pampilla refinery, just off Peru's coast north of the capital. The ship's captain told the South American country's Congress that oil spilled into the ocean for at least eight minutes.

Peru - which has a vast informal economy - does not have exact data on the number of fishermen affected, or of the people on the docks and ports who depend on the fishing industry, including restaurants, food vendors, and those who rent sun umbrellas or boats.

One thing is for sure: The affected artisanal fishermen are among the most economically vulnerable in Peru, harvesting small amounts of fish very close to the coast, sometimes from small boats and sometimes from the shore, said Juan Carlos Sueiro, an expert on the economics of fishing with the international conservation group Oceana.

'They are on the poverty line. Their income varies from day to day,' he said.

De la Cruz said he knew immediately that the oil spreading over more than 106 square kilometers (41 square miles) - an area larger than the city of Paris - would halt for the first time the activity carried out for centuries on Peru's Pacific coast.

'I saw the fruits of my livelihood destroyed,' he said. 'It's like if you have a store and someone comes and sets it on fire.'

Shortly after the spill, the government announced that it was looking into giving financial aid to those affected. Authorities took three weeks to come up with a list of 2,500 fishermen whom they would help. Two weeks after that, the government said it would now be Repsol who would give as much as $799 to each of the 5,600 people affected to compensate them for the income they've lost because of the spill. The Presidency of the Council of Ministers did not respond to a question from The Associated Press about whether the aid promise was still valid.

Many fishermen here don't have a certificate or papers to prove it is their livelihood. De la Cruz doesn't. But he knows that he has been coming here with a basket to be filled on his back for 30 years. He normally sells or trades the fish with the owners of restaurants or local homemakers and take some home to his wife to prepare in dishes that can be sold to neighbors.

De la Cruz said he felt 'broken' when he saw his work space swarmed by journalists reporting on the oil spill. He wanted to tell them and the authorities what he felt, so he took a blue ink marker and wrote on a piece of cardboard, 'Fishermen we need help please.'

Peruvian President Pedro Castillo visited the area, passed by De la Cruz, and promised to help. After looking at the puddles of oil, he'd shaken his head and said, 'This can't be.'

On another beach, Castillo had picked up oil-soaked sand and acknowledged the impact of the spill. 'What is the use of giving nets if they no longer have a place to fish?' he said.

But those presidential words, which ignited De la Cruz's hopes, have not borne fruit. More than a month after that visit, state aid does not exist.

'The days pass and we don't receive anything,' he said.

The fishermen have protested with their empty nets in front of the Repsol refinery and blocked roads, but they still have no answers to key questions such as: Who caused the oil spill? And how long before they can return to fishing?

Repsol, a Spanish company, has said huge waves created by a volcanic eruption in Tonga caused the spill and that the fault lies with the Mare Doricum oil tanker. In response, the company that owns the tanker has asked that Repsol not disseminate 'incorrect or misleading' information as the investigation continues.

Edward Malaga, a microbiologist and legislator from the centrist Morado party who has toured the polluted area and spoken with Peru's government and Repsol officials, said political instability is causing paralysis and disorder in Castillo's government and hindering a response.

Since the ecological disaster in mid-January, there have been three Cabinet shuffles and three different environment ministers. One of them was an inexperienced schoolteacher from the ruling party who barely lasted a week.

'You talk to an official and the following week there is another one who starts everything from scratch,' Malaga said. He said the four ministries and more than 30 associated bodies involved do not work in a coordinated manner.

'There is no webpage where you can go to see the work of each sector, day after day, how many fauna have been rescued, how many animals have been reported dead, how much has been cleaned,' he said.

So far Repsol has given out one or two cards - worth $135 each - to those affected to exchange for food at a supermarket. This is not enough to feed them, so the fishermen have organized community lunches with food donated by the Catholic Church and other organizations. In these meetings, the lack of financial aid is the recurring theme.

Ady Chinchay, a lawyer and researcher in environmental law, said fishermen can request compensation for loss of earnings in a civil court but there would be challenges.

'The judge is going to grant compensation based on the evidence' the fishermen present about their income, said Chinchay. For many of those affected by the spill, this will be almost impossible to do because they do not issue receipts when they sell their seafood.

This is the case with De la Cruz, who has never issued a bill of sale in 30 years.

'Imagine the desperation in my home,' he said. His wife sells empanadas to try to pay off debts but she no longer buys anti-inflammatories for the arthritis in her hands.

'Yesterday, we were just barely able to pay for natural gas,' he said.

SOLOMON ISLANDS: In a move that opponents said is aimed at controlling and censoring the media, the government of the ...

WASHINGTON D.C.: In July, a Florida man was killed by exploding Takata airbag inflators, possibly becoming the 20th death in ...

After series of assassinations, Israel says it has eliminated all IJ leaders

Israel has launched an unprovoked war against the Palestinian resistance group Islamic Jihad. The Israeli army assassinated a high-ranking commander ...

EAST NUSA TENGGARA, Indonesia: Hundreds of Indonesian tourism workers went on strike this week to protest a sharp rise in ...

NASSAU, Bahamas: A team of explorers have announced that they have uncovered a treasure, including coins, gemstones and priceless jewels, ...

NEW YORK, New York - U.S. stocks fell Tuesday, with broad-based losses across the board. The technology sector, however, wore ...

Survey of economists says 2022 Turkey deficit could grow to $40.2 bln

ISTANBUL, Turkey: Turkey's current accounts are expected to record a deficit of $3.4 billion in June and end the year ...

SYDNEY, NSW, Australia - Stocks in Asia were mixed Tuesday while in the Pacific, markets rose. The scene mirrored events ...

DHAKA, Bangladesh: Bangladesh raised fuel prices by some 50 percent this week, which is aimed at reducing the country's subsidy ...

NEW YORK, New York - U.S. stocks closed mixed on Monday as investors fret about CPI data due to be ...