'Like an Inferno:' US West Burning at Furious Pace 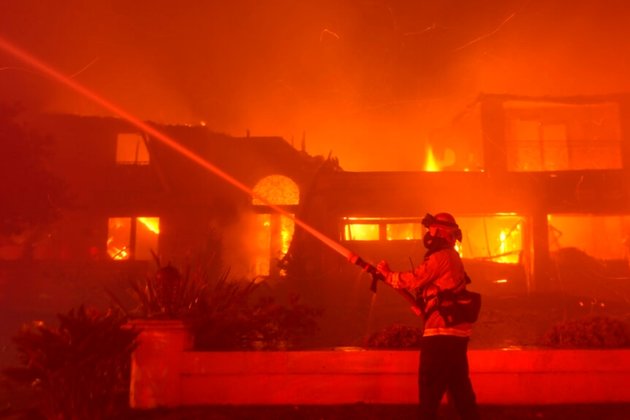 LAGUNA NIGUEL, CALIF. - Wildfires are on a furious pace early this year - from a California hilltop where mansions with multimillion-dollar Pacific Ocean views were torched to remote New Mexico mountains charred by a month-old monster blaze.

The two places could not be more different, but the elements in common are the same: wind-driven flames have torn through vegetation that is extraordinarily dry from years-long drought exacerbated by climate change.

As the unstoppable northern New Mexico wildfire chewed through more dense forest Thursday, firefighters in the coastal community of Laguna Niguel doused charred and smoldering remains of 20 large homes that quickly went up in flames and forced a frantic evacuation.

"The sky, everything was orange. It looked like an inferno, so we just jumped in the car," Sassan Darian said, as he recounted fleeing with his daughter and father while embers swirled around them. "My daughter said, 'We're on fire.' There were sparks on her and we were patting ourselves down."

Nationwide, more than 5,180 square kilometers have burned so far this year - the most at this point since 2018, according to the National Interagency Fire Center. Predictions for the rest of the spring do not bode well for the West, with the drought and warmer weather brought on by climate change worsening wildfire danger.

Firefighters work to put out a structure burning during a wildfire May 11, 2022, in Laguna Niguel, Calif.

"We all know it's really early for our fire season and we're all in awe of what we've already experienced ... to this point," said Dave Bales, commander on the New Mexico fire that is the largest burning in the U.S.

Fire officials said there was not much they could do in recent days to stop the fast-moving flames burning in tinder-dry forests in the Sangre de Christo range.

Fueled by overgrown mountainsides covered with Ponderosa pine and other trees sucked dry of moisture over decades, it's now burned across more than 1,048 square kilometers - an area bigger than the city of Dallas, Texas.

Crews fighting flames along the mountain fronts between Santa Fe and Taos mostly held their own on Thursday thanks to welcome help from aerial attacks. But fire operations chief Todd Abel said that in some places where winds were gusting over ridgetops, it was "almost like putting a hair dryer on it."

Even small fires that once would have been easily contained are extreme threats to life and property because of climate change, said Brian Fennessy, chief of the Orange County Fire Authority.

The perfect example broke out Wednesday afternoon when flames that may have been sparked by electric utility equipment were pushed up a canyon by strong sea breezes and quickly ignited large homes. They burned a relatively small area - about 81 hectares - but left a large path of destruction.

A sprawling estate selling for $9.9 million had looked in real estate listings like a California dream: teeming with luxuries that included a two-level library, a "wellness wing" with sauna and steam room and a pool on a terrace overlooking scenic Laguna Beach.

A firefighter works to put at a burning building during a wildfire May 11, 2022, in Laguna Niguel, Calif.

By nightfall, the mansion once photographed against a pastel sunset had morphed into a nightmare: its arched facade silhouetted against a glowing yellow sky as firefighters trained their hoses on the engulfed structure.

After the big flames died down Thursday, the house was one of many smoking casualties marked off with yellow tape. In another driveway, a burned-out car rested on its rims. The steep surrounding hillsides were blackened and stripped of vegetation.

Many other homes appeared unscathed and palm trees that had survived the onslaught of embers swayed above in calmer winds.

Two firefighters were hospitalized but no other injuries were reported.

Electric utility equipment has repeatedly been linked to starting some of the most disastrous California wildfires, especially during windy weather.

The state Public Utilities Commission last year approved a settlement of more than half a billion dollars in fines and penalties for SoCal Edison for its role in five wildfires in 2017 and 2018.

In New Mexico, another red-flag warning was expected to end by Friday night for the first time in a week, but extremely low humidity and bone-dry fuels will continue to provide ample opportunity for flames to spread, officials said.

"This fire is going to continue to grow," Bales, the incident commander, warned Thursday night.

Residents in four counties east and northeast of Santa Fe remained under a variety of evacuation orders and alerts, and fire officials expected the blaze to continue on a northeast path east of Taos through less-populated areas about 64 kilometers south of the Colorado line.

With strong spring winds tossing embers into unburned territory, the fire has grown tens of square miles daily since starting April 6 when a prescribed burn intended to clear out brush and small trees - to prevent future fires - got out of control. That fire merged with another wildfire several weeks later.

The blaze has burned more than 170 homes so far, but authorities have said that number is expected to increase significantly as more assessments are done and residents are allowed to return home to areas deemed safe.

The New Mexico fire has burned through mostly rural areas that include a mix of scattered ranch homes, historic Hispanic villages that date back centuries and high-dollar summer cabins. Some of the ranching and farming families who have called the area home for generations have spoken at length about the sacredness of the landscape, while many others have been too brokenhearted to express what they have lost.