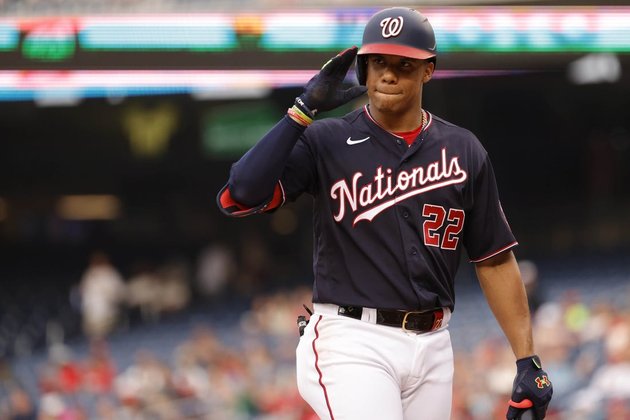 The Padres also received first baseman Josh Bell in the deal, which significantly upgrades the second-place team in the National League West.

The deal is similar to one the Nationals made last year, when they sent Max Scherzer to the Los Angeles Dodgers and the trade was finalized to also include shortstop Trea Turner. Washington received a haul of prospects that included catcher Keibert Ruiz.

The Dodgers and Padres are set for a three-game series at Los Angeles starting Friday after San Diego completes the current five-game home series against the Colorado Rockies.

A two-time All-Star, Soto reportedly rejected a 15-year, $440 million extension offer from the Nationals last month. Trade negotiations began in earnest from there, with Soto going on to appear in the All-Star Game, while also winning the Home Run Derby, in the interim.

While Hosmer ultimately was traded to the Red Sox, Voit now returns to the East Coast after hitting 13 home runs with 48 RBIs for the Padres in 2022 after spending his previous four seasons with the New York Yankees. Voit, 31, is a career .258 hitter with an .838 OPS and has 86 home runs and 251 RBIs in six seasons with the St. Louis Cardinals, Yankees and Padres.

In Gore, the Nationals will receive a pitcher who has been impressive at times during his rookie season but currently is on the injured list with elbow soreness. The 23-year-old was 3-1 with a 1.71 ERA over the first eight games of the season but trailed off from there and is 4-4 with a 4.50 ERA in 16 appearances (13 starts).

Abrams, 21, also is a rookie this season, batting .232 with two home runs and 11 RBIs in 46 games. He started 28 games at shortstop with regular shortstop Fernando Tatis Jr. still out following a motorcycle crash in the offseason.

Hassell, 20, was considered the Padres' top prospect by MLB.com, while Wood, 19, was considered San Diego's No. 3 prospect. Both players are at the Class-A level. Susana, 18, is a native of the Dominican Republic who is getting his professional start at the Arizona Complex League this summer.

SOLOMON ISLANDS: In a move that opponents said is aimed at controlling and censoring the media, the government of the ...

WASHINGTON D.C.: In July, a Florida man was killed by exploding Takata airbag inflators, possibly becoming the 20th death in ...

After series of assassinations, Israel says it has eliminated all IJ leaders

Israel has launched an unprovoked war against the Palestinian resistance group Islamic Jihad. The Israeli army assassinated a high-ranking commander ...

EAST NUSA TENGGARA, Indonesia: Hundreds of Indonesian tourism workers went on strike this week to protest a sharp rise in ...

NASSAU, Bahamas: A team of explorers have announced that they have uncovered a treasure, including coins, gemstones and priceless jewels, ...

NEW YORK, New York - U.S. stocks fell Tuesday, with broad-based losses across the board. The technology sector, however, wore ...

Survey of economists says 2022 Turkey deficit could grow to $40.2 bln

ISTANBUL, Turkey: Turkey's current accounts are expected to record a deficit of $3.4 billion in June and end the year ...

SYDNEY, NSW, Australia - Stocks in Asia were mixed Tuesday while in the Pacific, markets rose. The scene mirrored events ...

DHAKA, Bangladesh: Bangladesh raised fuel prices by some 50 percent this week, which is aimed at reducing the country's subsidy ...

NEW YORK, New York - U.S. stocks closed mixed on Monday as investors fret about CPI data due to be ...