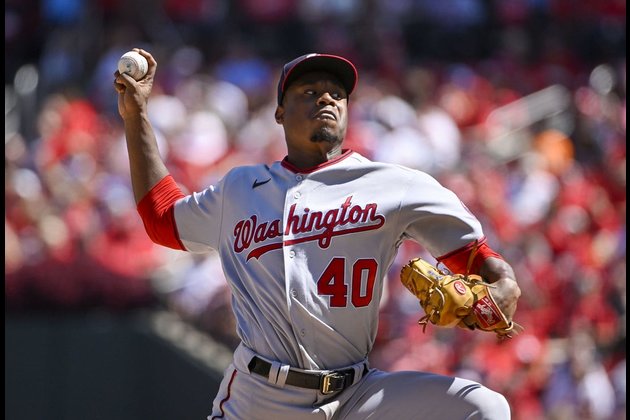 With Trevor Rogers on the injured list for the rest of the season, the Miami Marlins have yet to announce a starting pitcher to take his spot in the rotation for Friday night's game against the visiting Washington Nationals.

The Marlins recalled left-hander Braxton Garrett from Triple-A Jacksonville on Thursday. Garrett, who made 14 starts for Miami this year, is one probable candidate for Friday's start.

One of the few feel-good stories of Washington's lost season has been Joey Meneses, who belted a two-run home run in the seventh inning on Wednesday to rally Washington to a 3-2 win over the surging Atlanta Braves.

Prior to signing with Washington in January, Meneses played in Mexico and Japan and bounced around the Atlanta Braves, Boston Red Sox and Philadelphia Phillies organizations.

"I can't say enough about what Joey has done for us since he's been here," Nationals manager Dave Martinez said. "He's been hitting balls, doubles, homers, getting on base."

The Marlins will use the remainder of the season to continue looking at young players such as catcher Nick Fortes, first baseman Lewin Diaz, infielders Jordan Groshans and Charles Leblanc, and outfielders JJ Bleday, Bryan De La Cruz and Jerar Encarnacion.

While Diaz is Miami's best defensive first baseman, offensively, he has just a .574 OPS in 314 career plate appearances over the past three years. This year has been even tougher for Diaz, who turns 26 in November. He is hitting just .167 with a .515 OPS.

Every game is important to Diaz, who is hoping the Marlins don't give up on him.

"His (batting) average is not very good, but we are seeing some production," Marlins manager Don Mattingly said in reference to Diaz's four doubles and four homers in 46 games.

Of the aforementioned young Marlins players, Fortes likely is the only one who has nailed down a job for 2023.

A Marlins fourth-round pick in 2018, Fortes made his MLB debut last year and has a .773 career OPS. He also has 12 homers in just 78 games. In contrast, starting catcher Jacob Stallings has a .584 OPS this year with just four homers in 108 games.

Fortes hit an opposite-field home run in the Marlins' 4-3 loss to the Chicago Cubs on Wednesday.

"I've been working on that hard recently, trying to use the whole field, because my strength is the pull side," Fortes said. "So I've been kind of trying to get better at going the other way. Literally the past two weeks that's been all my work, and thankfully it's kind of helping me out recently here."