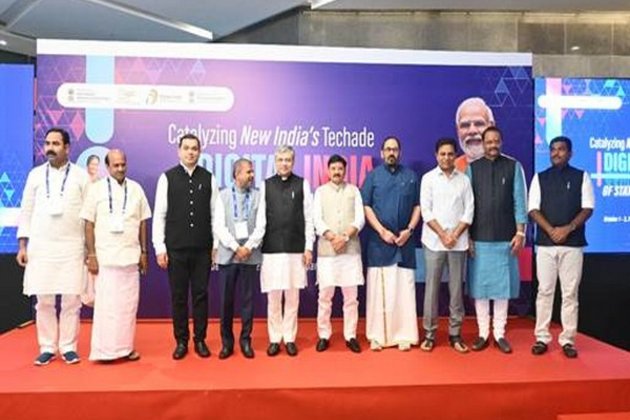 New Delhi [India], October 4 (ANI): The Digital India Conference of State IT Ministers, along with the sixth edition of India Mobile Congress (IMC 2022), was held on October 1 and was inaugurated by Prime Minister, Narendra Modi, said a statement from the Ministry of Electronics and IT.

After the inaugural session of IMC 2022, the "Digital India Conference of State IT Ministers" was held under the chairmanship of the Minister for Communications, Electronics and Information Technology and Railways, Ashwini Vaishnaw in the august presence of the Minister of State for ElectronicsInformation Technology and Skill Development and Entrepreneurship, Rajeev Chandrasekhar and Minister of State for Communications, Devusinh Chauhan and IT Ministers from 12 States and UTs, namely Andhra Pradesh, Assam, Bihar, Madhya Pradesh, Gujarat, Goa, Manipur, Uttarakhand, Telangana, Mizoram, Sikkim, and Puducherry," as per the statement.

In the welcome address and initial remarks, Alkesh Kumar Sharma, Secretary of MeitY shared - how Digital India proved its resilience during a pandemic. He shared the latest initiatives such as My Scheme, Meri Pehchaan, Digital Bhashini, and PLIs, which can be leveraged by the States and UTs for uplifting ease of living and ease of doing business. He emphasized making all efforts for making this decade India's TechAde.

Devusinh Chauhan, in his address, stated that the introduction of 5G services in India today is a historic day. He shared that time taken to obtain RoW permission has been reduced from 3 months to 6 days.

Rajeev Chandrasekhar said that there is an unprecedented opportunity for growth and the world is looking to India as a trusted supply chain partner, especially in the electronics sector. He mentioned digital devices, digital data, deep technologies, and massive diversification in the supply chain.

He emphasized that all States and UTs, as Team India, should leverage PLI schemes to attract companies, make policies to take startup culture to tier 2/3 cities, and leverage India Stack solutions and digital platforms built around it to standardize the citizen-centric and business-centric services.

Ashwini Vaishnaw, in his initial address, stated that Team Digital India comprising Central and State Governments has to fulfil the aspirations of youths and 1.3 Bn people. He said that the focus is on creating employment, achieving the target of a 1 Trillion Dollar Digital Economy and 1 Crore Digital Jobs by 2026. He also said that coming up with the new policies namely Telecom Bill and Digital Data Protection Bill States are encouraged to share their constructive suggestions.

Thereafter, State / UT IT Ministers shared the progress of connectivity, electronic manufacturing efforts, and e-governance initiatives taken under Digital India in their respective States. They also shared the issues concerned with connectivity, the opening of more centres of NIELIT, CDAC, STPI, the opening of CoE in emerging areas and policy matters.

In his closing remarks, MEIT stated that connectivity is vital for Digital India and its reach to every corner of the country. He announced that Rs 36,000 crore to install new 25,000 towers in the next 500 days have been approved. The list of spots for installing towers is prepared in consultation with States / Chief Secretaries. States can further review the list. He also announced that Rs 1.64 lakh crore will be used for the revival of BSNL in a comprehensive manner and it will be rolled out in the next 18 months.

Design in India and Make-In-India will be a big beneficiary. He congratulated all States and UTs for their speedy onboarding at PM Gati Shakti. He also announced that the fibre network will be put on a common portal, which will help States and UTs to plan layout-driven infrastructure projects and digital transformational projects. He informed that the policy-related matter is / will be determined in due consultation with States. He also shared that the special assistance to States for capital expenditure worth Rs 2000 Crore has been supported.

He encouraged the states to be proactive and make business-friendly policies to attract businesses to their States. Emphasizing the moto of Sabka Saath and Sabka Vikas, he stated that the commitments from all States and UTs, large as well as small States, are vital in taking Digital India to a higher level and in realizing the AatmaNirbhar Bharat and Trillion Dollar Digital Economy. (ANI)